11 Celebrities Copied Their Colleagues’ Outfits, and We Can’t Decide Who Wins This Fashion Battle

Some world-famous celebrities hire a whole team of stylists and makeup artists to be spectacular and original in their every public appearance. But not everyone succeeds in looking special when a new look comes up, as different celebrities can like similar looks from the same fashion brands and designers. And occasionally, celebrities intentionally mirror their colleagues. While some do it rather delicately, copying only some specifics and distinguishing features here and there, others copy the outfits of other celebrities entirely. 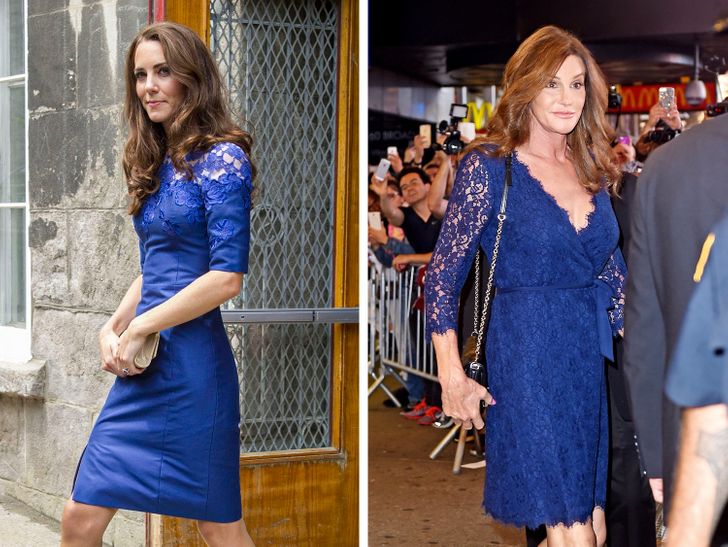 As Caitlin Jenner gained self-confidence in 2015, she started appearing regularly in public, posing for the paparazzi wearing beautiful outfits. It seems she has wanted to benefit from the experience of her known style model, Kate Middleton, from whom she has taken several ideas for her looks. For example, Caitlin’s blue dress with lace looks very much like an outfit chosen by Duchess of Cambridge for a 2011 public event. 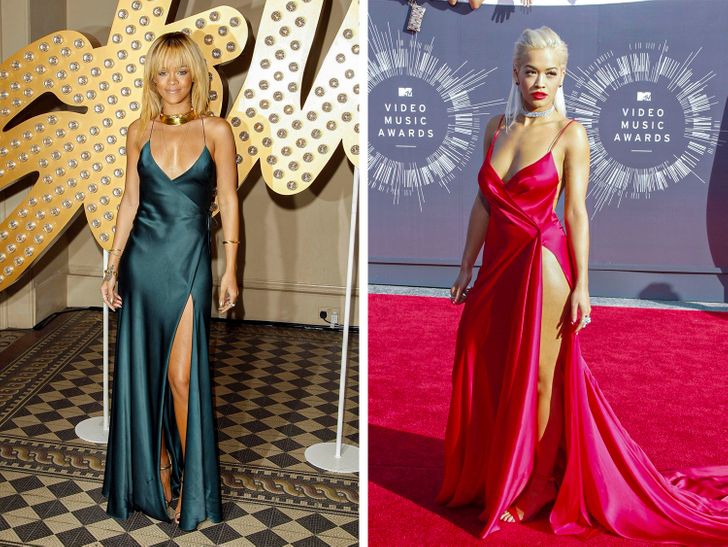 Since Rita Ora first appeared on show business, people began to compare her to Rihanna. And there were reasons for that — many of her dresses strongly imitate the Barbados singer’s gowns. Rita was inspired by the daily and evening outfits of Rihanna, as well as her costumes for the stage. For example, 2 years after Rihanna shone brightly in a similar outfit, Rita wore a satin dress with a high slit on the red carpet.

Also Read: A 57 Years Old Mom Copied Her Daughter And Got 20,000 Instagram Followers 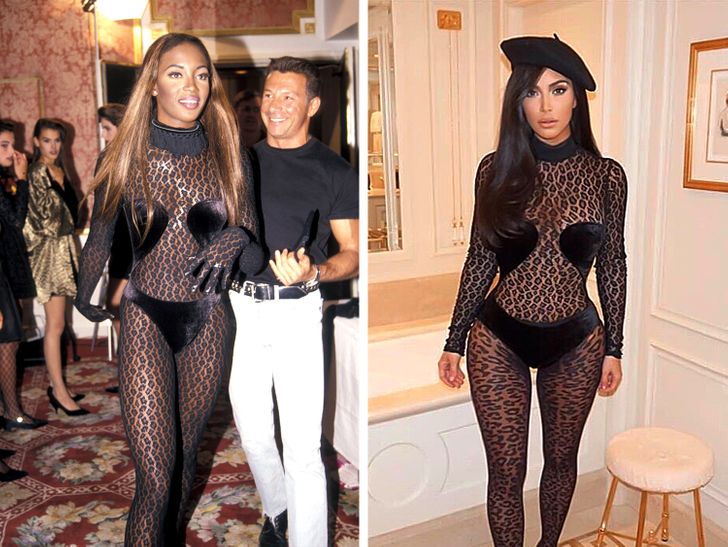 The it-girl frequently appears in public wearing clothes that are reminiscent of the 1990s, but it seems that her influence comes from the supermodel, Naomi Campbell, and not from the time itself. Kim Kardashian borrowed several ideas from the runway star and seemed to wear almost the same dresses and styles in public. She tried on the iconic leopard jumpsuit in 2019, that Campbell wore back in 1991 at a fashion show. This doesn’t shame Kardashian and she leaves captions under her photos with the looks borrowed from the supermodel saying, “Naomi Forever.” 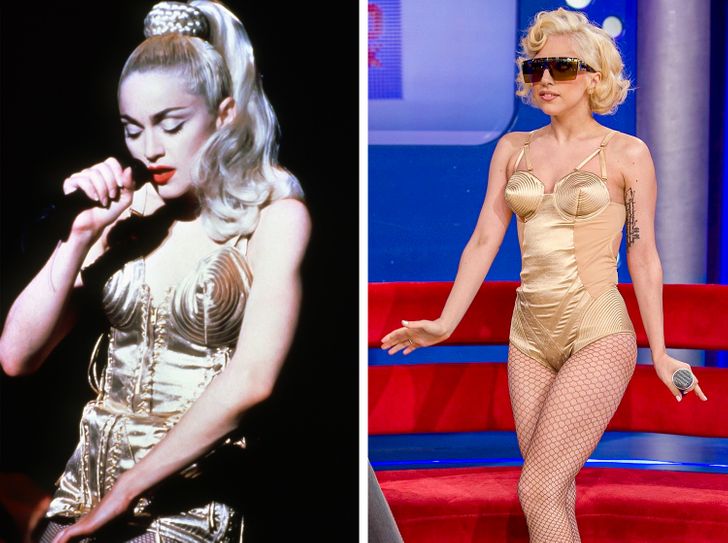 In 2011, a major storm was raging around the name of Lady Gaga — many people found that her latest album, “Born This Way” sounds a lot like Madonna ‘s hit “Show Yourself.” These singers have parallels not just in their music but also in their style. Several times, Lady Gaga was seen wearing outfits that distinctly mimic the signature look of Madonna, such as conical tops, mesh tights, corsets, high-leather boots and other clothing pieces. 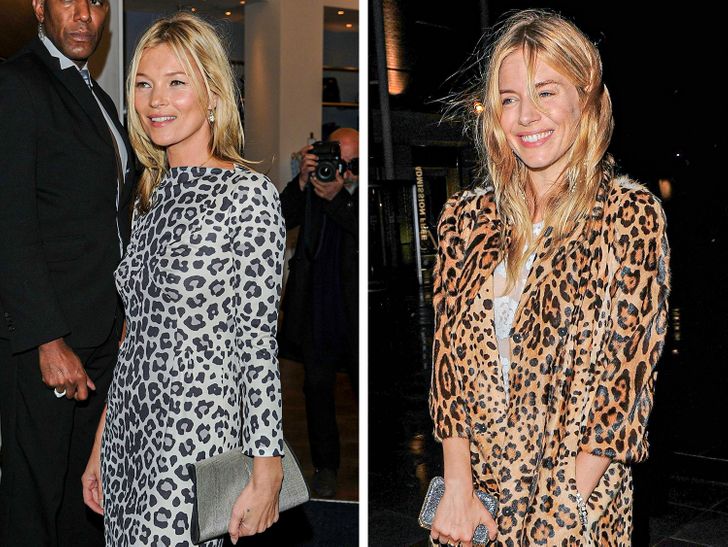 Kate Moss and Sienna Miller have been fighting the cold war for over 10 years. It all started with a guy, as usual. The fact is that Miller stole the best friend of the model, actress Sadie Frost, from Jude Law. And the fact that Sienna gets inspired by Kate’s outfits just adds fuel to the fire. Jeans and sweaters with stripes, leopard prints, fur coats and jackets, fringe boots — these elements of clothing give us a reason to believe the ex-lover of Jude Law borrows from Kate’s ideas. 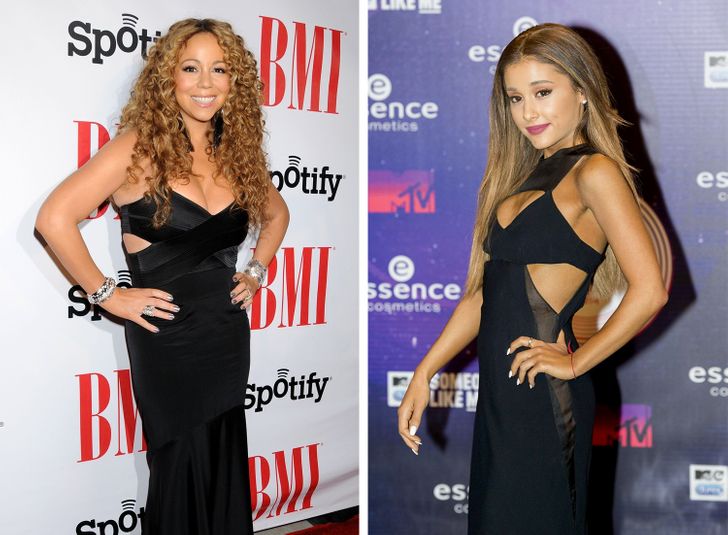 Grande imitates her idol, Mariah Carey, in everything — in her performance style, music style, actions, and looks. And it does seem like she doesn’t even try to hide it. Short tops, denim skirts, tight corset dresses — all of these concepts for clothes were borrowed from Carey ‘s wardrobe. But Ariana also has its own signature look embraced by many of her fans — the popular high ponytail. 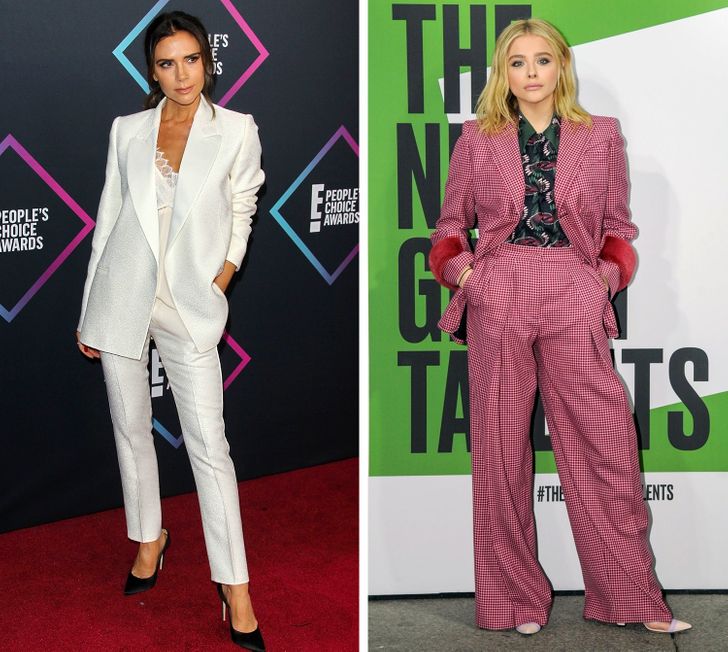 When Chloe Moretz began dating Brooklyn Beckham, more business-style outfits were replaced by the dollish dresses she used to love, which Victoria is not indifferent to. Pantsuits, blouses, classic coats, oversized jackets — it seems as if the actress borrowed from her potential mother-in-law all those looks. And even though Chloe and Brooklyn have since broken up, the young star still appears to this day in these kinds of strict and succinct outfits. 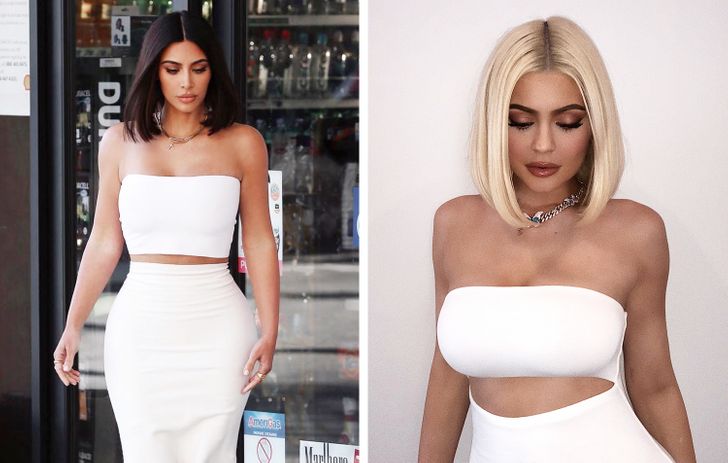 Younger children frequently mimic their older siblings, and that practice has not escaped the Kardashian sisters. Kylie borrowed ideas for her looks from Kim more than once at the start of her career. Since then Jenner seems to have found her own style — but from time to time outfits that have references to the looks of her sister still appear in her wardrobe. But Kim doesn’t seem upset. She and Kylie released a cosmetic line together in 2017, and they posed for the ad campaign in nearly identical looks during the photoshoot.

Also Read: 20 The Most NSFW Outfits To Walk The VMAs Red Carpet 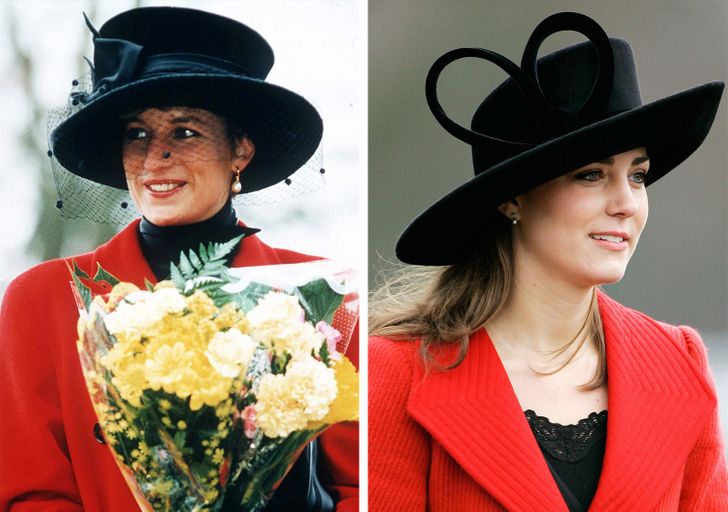 Although some celebrities get inspired by Kate Middleton ‘s style, the duchess finds her mother-in-law a role model for herself. Her numerous outfits which have similar characteristics to the iconic looks of Princess Diana prove this assumption. For example, Princess Diana probably borrowed the look the duchess chose to attend a parade in 2006. 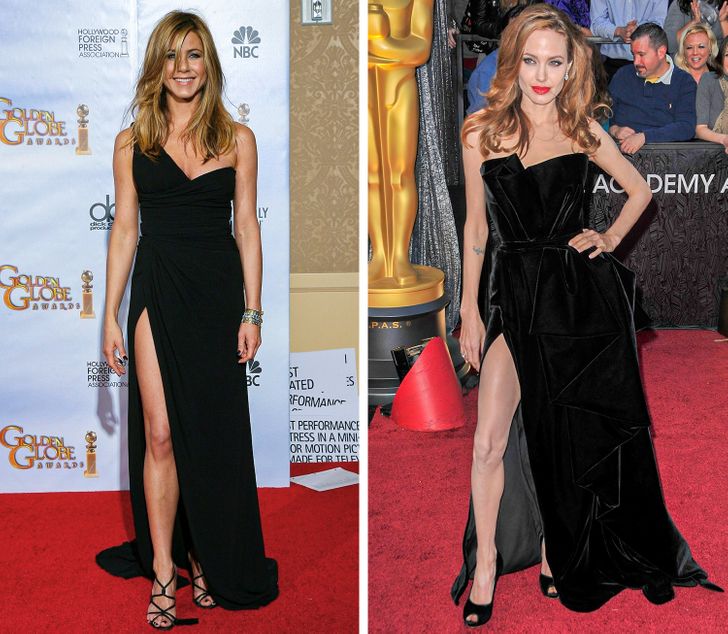 Brad Pitt ‘s ex-wives are often compared in the media and on social networks and pitted against each other. And the media have justification to do so. Some of Jolie’s dresses have something in common with Aniston ‘s style, their fans have noted. The black floor-length dress with a high slit that Angelina wore at the 2012 Oscar ceremony is especially reminiscent of Aniston’s dress she wore at a 2010 public event. 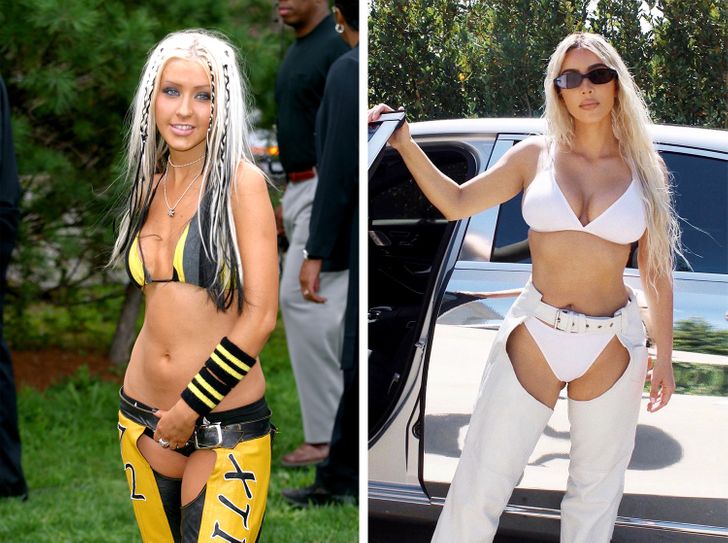 It turns out Kim Kardashian finds inspiration not only in the wardrobe of Naomi Campbell but also in the style of Christina Aguilera. The fans of this it-girl noticed that the legendary look from the singer’s music video Dirrty is very similar to her snow-white outfit with cowboy leather pants. It’s also interesting that the younger sister of Kim, Kylie Jenner, had recreated this outfit to the smallest detail.

What do you think about plagiarism in show business fashion? What celebrity, in your opinion, managed to do better than the initial costume, and who didn’t look so good to mimic others’ looks?

Eating Pizza and Burgers is Still Good Way To Get Awesome Figure, Proved By Bru